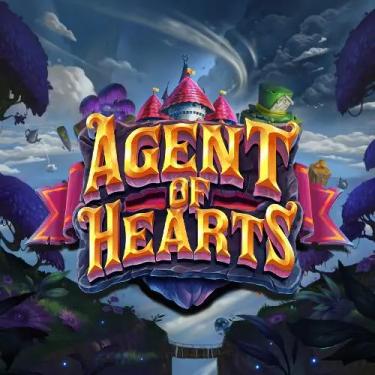 Become the Agent of Hearts in Play’n GO’s third installment of the Rabbit Hole Riches series. Team up with the villainous Queen of Hearts and search for three stolen magic keys that open the safe containing the Queen’s heart. Successfully complete your quest and reap her majesty’s generous rewards of up to 5,262x your stake.

Agent of Hearts is about getting as many clusters of symbols as possible. Spins work based on the well-known and popular tumbling feature where the winning symbols are removed from the grid and new ones land on their place. symbols fall from above.

However, even if you don’t manage to cluster symbols together you still have a fair chance to win. This is because every time you make a non-winning spin, you have a chance to add, between four and seven, Random Heart Wilds to the grid. These are the wild symbols in Agent of Hearts which can substitute for all symbols except Keys.

On the left is an Agent Meter that corresponds to the four premium character symbols. This is the main base game feature in which you’ll need to collect 6 winning symbols to fill the corresponding meter. Agent symbols are collected when they form part of a winning combination and each possesses a unique modifier.

In addition, The White Rabbit can appear out of nowhere and grant you a random modifier without filling the bar yourself. The modifier benefits are:

Cupcake Splat - A trail of cupcake bombs is left behind him as the Dormouse races across the grid. They explode, either removing the symbol beneath them or transforming it into a random symbol.

Smokin’ Phat - Smoke trails, blown diagonally by the Caterpillar, are visible across the grid. Symbols beneath the smoke will be removed or transformed into random symbols.

Grinning Cat - When the Cheshire Cat's grin covers the grid, it removes or transforms the symbols below it.

The Mad - You will receive 6 to 9 Mad Hatter symbols at random on the grid. Each one removes an adjacent symbol and transforms it into a randomly chosen symbol.

When three keys are collected in one spin, the Queen's Heart free spins bonus game is triggered. The feature is a one spin-only bonus round. No new Keys can land, so the feature cannot be re-triggered. To make up for that fact, you’ll be granted all 4 modifiers which will play out in this sequence: Cupcake Splat, Smokin’ Phat, Grinning Cat, and lastly Mad Hat.

Once the cascades have concluded you’ll also unlock the Queen’s Heart Mega Wild as a grand finale. She’ll unleash the Random Heart Wilds feature and also jump on the board herself as a 3x2 Mega Wild symbol.

Feels very chaotic even when you know the rules and like only one of the four modifiers really does anything meaningful. The one spin bonus game is pretty cool though. All of the action is condensed into one quick round which feels very satisfying and straightforward.