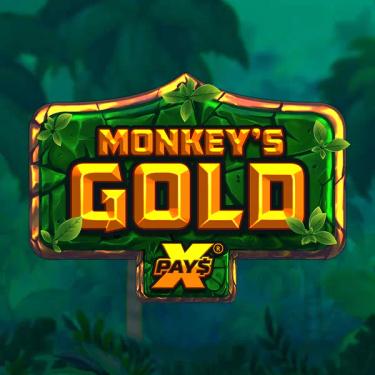 Set in the deep lair of the Monkey King, Monkey’s Gold is a testament to Nolimit City’s seemingly endless wealth of creativity and talent. Featuring straightforward mechanics, Monkey’s Gold is fun and rewarding, with the massive 12,683x the bet treasure just waiting for players to discover.

Monkey’s Gold plays on a 6x6 configuration which can feature up to 36 symbols. Amidst the mossy statues and piles of gold lying strewn about are symbols that are rustic in design, yet distinct. Monkey's Gold offers an RTP of 96.02% but surprisingly, Nolimit City rated the game at medium volatility. This means players will see a piece of the action much sooner than expected.

Nolimit didn’t include the win ways or paylines but instead uses the xPays mechanic, one of the studio’s innovative features. Whenever players align three or more matching symbols horizontally, all non-winning symbols disappear from the grid while the winning ones drop to the bottom. The xPays continues until no more wins are created. The game then multiplies the number of collected symbols by their values (should more than one type of symbol score) for a total payout. In short, players trade on-the-spot small wins for one massive reward.

Although Nolimit City’s games are all of high production quality, they suffer from complicated mechanics that are too convoluted from time to time. Monkey’s Gold, on the other hand, is a rare exception in that it incorporates Nolimit City’s ingeniously entertaining gameplay design into a smooth experience while making it user-friendly, a much-needed balance that Nolimit City has finally achieved.

Wilds in Monkey’s Gold substitute for all symbols except scatters. Furthermore, they will inherit any multiplier value on the symbol they replace. Symbol Upgrade is the first mechanic featured in Monkey’s Gold. When winning symbols fill up a row, they get an upgrade to one tier higher. The highest-paying symbol gets a multiplier upgrade instead.

Colossal symbols of 2x2 or 3x3 in size might drop randomly on any xPay trigger. These colossal symbols have a multiplier ranging from 4x up to a whopping 500x multiplier. When these symbols drop and leave a gap beneath them, Wild symbols will fill these positions. One thing players should consider is that all multipliers apply to the number of symbols, not the total win.

To access the Bonus Round, players need to collect at least 3 Scatters. The base reward is 10 Free Spins but players get a chance to collect +3 Free Spins for each Scatter they land beyond the first 3. Before the bonus round begins, the game rolls the dice to determine the starting multipliers, which are 1x, 2x, or 3x. Additionally, the game also provides players with an extra 1+ Free Spin for every Scatter landed during the Bonus Round.

Players will also notice the Vine Multiplier in the upper right corner of the screen. Vine Multiplier increases by 1x, 2x, or 3x whenever players fill up an entire row with symbols. The value of this multiplier is active throughout the bonus round and applies to the total winning, which then combines with the xPay mechanic for even greater payouts.

Nolimit City's games hold a special place in my heart because of how unique they are. Each piece is an original rather than a copy. The game is extremely well-made, but somehow doesn't feel like a Nolimit City production, probably because it isn't as crazy or gritty as the others from the same developer. The game is very good but I am not a fan honestly. However, if you are looking for a non-volatile but entertaining slot, Monkey's Gold might be right for you.