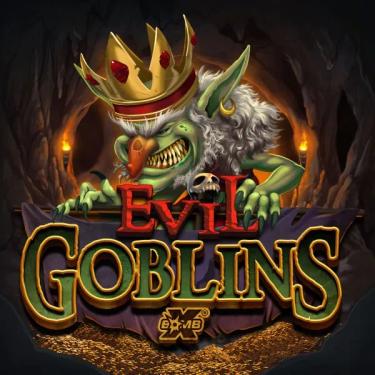 Evil Goblins xBomb is a slot by Nolimit City that centers around naughty green goblins messing with heavy explosives. Yet somehow, these goblins provide a tremendous helping hand to players in the quest of netting the biggest win. True to the Nolimit City catalog, Evil Goblins allows you to buy the bonus rounds, but you may be surprised at how many variations there are on sale.

Evil Goblins comes with an abundance of features to spice up the gameplay, the first of which is Cascade, meaning winning symbols disappear for new ones to appear. There is also the Resurrection Wilds feature, requiring 3 dead wilds to activate. Dead Wilds are gray skulls that do nothing for players until 3+ of them are present, by which point they turn gold and reward a multiplier:

Sometimes, goblin symbols can become wilds with the Goblin Sacrifice feature. Every spin 4 random goblins cling to the top of the reels, and if any of them match with a goblin symbol on their reel, they transform the goblin symbols into wild symbols.

Moreover, when the four goblins on top are of the same type, the Evil 4 feature is activated. The matching goblin will sit on reel 1 and any goblin symbol of that kind on reel 1 will be blessed with a 4x multiplier. This multiplier keeps increasing by 1 every time there's a matching goblin appearing on top of the reel.

There is yet another feature in the base game called the xBomb feature. Randomly, xBomb symbols may appear and explode, destroying adjacent symbols. After they do so, the win multiplier will be increased by 1 and an extra row is added (up to 7 rows).

Land 3 or 4 Scatter to trigger the Fresh Meat Spins feature with 8 or 9 free spins. During this round, you're guaranteed Dead Wilds every spin, and there's a better chance of triggering the xBomb and Goblin Sacrifice feature. Additionally, every extra scatter that lands awards one bonus spin.

If you get 3 Scatters at the same time with 4 matching goblins on top, the Goblins Feast Spins feature is activated. You only get 4 free spins but whenever a goblin on top of the reel matches with a symbol below it, the free spins reset to 4 and the multiplier increases by 1 for the rest of the round. And if you're the luckiest of them all you may get the ultimate bonus round: the Explosive Goblins Feast Spins.

Evil Goblins xBomb is the slot game incarnation of the expression 'all style, no substance'. Some developers seem to think stuffing a slot to its brim with features always leads to a good slot. Wrong. The features here often underdeliver both in satisfaction level and cash returns.

Moreover, the free spins rounds aren't even creative, they simply combine the base features together. They can be extremely hard to get and once you get it, the features don't compliment each other well so end up with a disappointing bonus win.