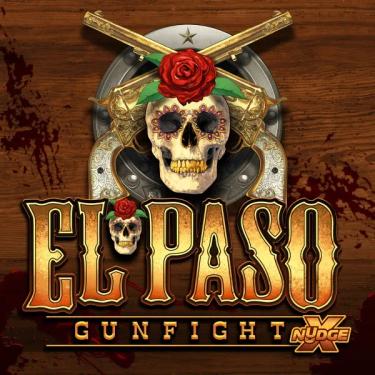 El Paso Gunfight xNudge slot is inspired by the real historic person Dallas Stoudenmire, who was the marshall in El Paso, here presented as a special Wild symbol. He was the protagonist of one of the Texas most famous gunfights named “Four Dead in Five Seconds”, which is also the name of one of the numerous bonus features in this slot.

The famous gunfight took part at the saloon, which is the background of this slot, enhanced with superb graphics and animation, so realistic that you can even shoot the bootles on the shelf. Sounds intriguing? Well, just wait until you see what else this wild slot has to offer.

The shootdown is taking place on a 5-reel grid with up to 43,334 ways to win when fully expanded. El Paso Gunfight xNudge is playable from €0.25 and has a massive maximum winning potential of up to 44,440x the bet.

Like most of Nolimit City’s slots, this one comes filled with interesting features, starting with Stoudenmire xNudge Wilds. Appearing only on reels 2,3 or 4, these 3-row high symbols always nudge to be fully visible. Every nudge increases the Wild win multiplier by 1, while the multiplier values are added together if more than one of these Wilds is on the grid.

Deputy and Marshall Raids are activated whenever the Deputy Badge or Marshall Badge land on reels, implementing the following traits:​

Three Scatters landing simultaneously trigger 8 Gunfight Spins, where you also get to choose high or extreme volatility mode. During the feature, Scatters transform into jumping Wilds, bouncing to a new position on each spin. Deputy Badges or Marshall Badges appearing on the grid award an extra free spin, at the same time upgrading the feature to one of the three other free spins rounds.

One badge symbol falling at the same time as three Scatters activate 9 Deputy or Marshall Gunfight Spins. Badge symbols landing in this round have the same role as in the base game, but with an added perk - they stay locked in position for the rest of the feature.

However, if both badges land together with 3 Scatter, 10 Drunken Gundfiguth&r… Spins are awarded. The game area opens up to a 4-3-3-3-4 grid layout where you get 5 jumping Wilds and sticky Stoudenmire xNudge Wilds.

But that’s not all, as this slot has one more lethal respin feature under its sleeve. Called 4 Dead in 5 Seconds, the feature awards one respins when 4 high value symbols and a Stoudenmire Wild land in the main game. Stoudenmire Wild expands to cover all 3 middle reels, while its multiplier is applied to the respin payout.

I tried this first day it came out, and if you remember Troops, it was quite a lucrative visit. A big win, but despite it, El Paso is still not at the top of my list. Something is just missing from the big picture and feels very scripted when you buy the bonus.

Don’t get me wrong, El Paso Gunfight xNudge slot does have potential. It is filled with features and it’s a good game altogether, just not my perfect cup of tea.