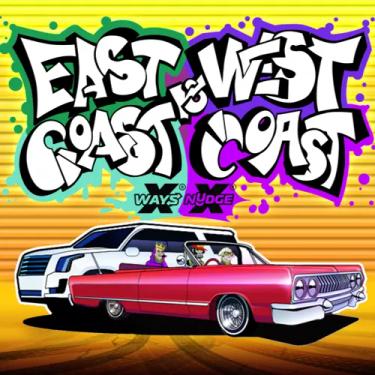 The creativity of Nolimit City shows no signs of rust as they take players on yet another unique nostalgia trip to the rap scene of the 90s. Featuring some of the most iconic artists of the time, East Coast vs West Coast offers not only hip hop’s golden age experience but also some of the biggest winnings at 30,618x the bet.

The game’s background is split up into two sides - the vibrant, warm tone of the West is represented on the left while the cool blue of the East Coast is shown on the right. The music, accompanied by bold, colorful graffitis, is a chill, jazz-punk instrumental track true to the hip-hop theme. The heavy hitters, high-paying symbols of the game are the ghetto blaster, the pitbull, and the three presidents of the United States, George Washington, Abraham Lincoln, and Benjamin Franklin. A full 5 of-a-kind can bag you anywhere from 2x to 7.5x the stake.

Stat-wise, East Coast VS West Coast plays on a grid made of 5 reels and 3 rows. While the base number of paylines is 243, it can go up to a maximum of 84,375. To present hip-hop as an extreme form of expression, at least back in the 90s, Nolimit City puts the game’s level of volatility at “Extreme”, which equates to 10 out of 10 ratings. Players shouldn’t worry much as the RTP is 94% and the hit chance in this game is rather high at 30.27%.

The wilds in East Coast VS West Coast are symbolized by gold-ornamented knuckle dusters that spell out “WILDS”. They can combine with other winning symbols to increase the payout.

The scatters are symbolized by the spinning car wheels, which enable free respin if 1 appears on your screen. Land at least 2 scatters to trigger the Drive-By Respin feature, as this gives you 1 respin alongside one of the 5 random enhancers. These enhancers are as followed:​

Furthermore, landing 3 or 4 scatters will score you 8 or 10 free spins respectively, you will then be presented with 2 options, West Coast spins or East Coast spins. Landing 5 scatters, however, will net you the Coast to Coast free spin mode. Here’s what the winning looks like for each of the 3 bonus rounds:​

This is a very fun game with a lot of charm in it. The amazing graphics are accompanied by the top-notch soundtrack, creating an immersive gaming experience. East Coast VS West Coast is highly volatile but the rewards are well worth it. It is also highly satisfying landing the free spins, as you get to unlock the round of your choice and enjoy some quite fun and generous modifiers. And with ways to win rising up to 84,375, there is more than enough of chance to land some hefty prizes.