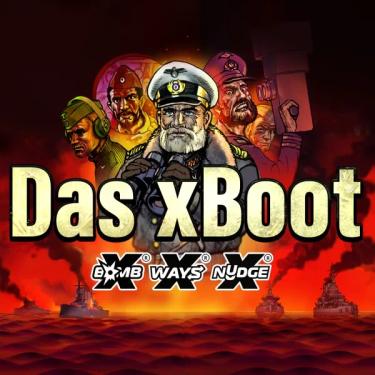 Based on the German war movie dating from 1981, Das xBoot slot by NoLimit is a true blast from the past. Showing all the struggles of the soldiers trapped in the submarine, the movie might be hard to watch, but that’s not the case for its version on reels.

Ready for a bombastic playing experience where symbols explode? Then come aboard!

There’s no place for claustrophobia if you wish to board the U-boat and take part in the action taking place on a 6 reel grid with 2-3-4-4-3-2 configuration by placing a bet in a range from €0.25 to €100. Depending on the game phase and certain symbols, the layout changes.

So does the RTP that goes from 96.3% in the base game to 96.56% when you buy a bonus feature. With up to 75,715 ways to win, this extremely volatile release has an astonishing maximum winning potential of 55,200x the stake.

Those who love fast and unpredictable gameplay with abundance of special boosts will probably love Das xBoot armed with the provider’s renowned trademarked features. Every xNudge Wild landing nudges to cover the entire reel. At the same time, each nudge increases the Wild Multiplier by +1.

Appearing only on reels 2 and 5, xWays symbol adds additional winning ways as it reveals 2-3 of the same symbol. Once in sight, xBombs blow away the non-winning symbols from the reel, making room for new ones to fall in, while also increasing the win multiplier by one before the next collapse.

Represented as a sonar display, the bonus symbol is responsible for activating free spins. Three of a kind trigger Silent Hunter Free Spins in the form of a short boat attack animation , whilst four bonus symbols activate  8 Wolf Pack Free Spins. Of the two, the second free spin mode might be more rewarding as it comes with a hefty multiplier feature, xWays and xBomb symbols. Nevertheless, both are extremely engaging and can be purchased via the Buy Bonus option.

NoLimit City is one of the top software providers as it delivers world-class slots with thrilling gameplay and huge winning possibilities. Das xBoot is no different as it offers all that, plus some of the best special bonus features - xNudge Wilds, xWays, xBomb Wild Multipliers, Silent Hunter Spins, and Wolf Pack Spins.

In one of the first streams with this game I hit $73,000 win from a $30 bet in purchased Wolf Pack Spins. And it wasn’t even a full way! That wasn’t even my personal best - remembered when I went to get a banana and the slot produced a win over $113,000? It is such an insane and random game that I gladly recommend to my troops.