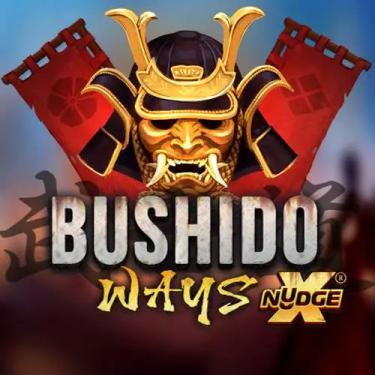 Focused on medieval times, Nolimit City’s Bushido Ways honors the way of the warriors by making a game with beautiful artwork and a good soundtrack. Players can immerse themselves in Japanese culture while enjoying the massive maximum payout of 30,000x the stake and 1,024 pay lines.

Featuring a desolate, burning field in the background, accompanied by dramatic music and bold sound effects, Bushido Ways drops players straight in the middle of an ongoing battle. The high-paying symbols are portrayed by the 3 warrior figures and they can net you 1x or 2x the stake for 5-of-a-kind. Do not get worried by the premium payouts though, as the game contains a variety of ways to increase your winnings.

The volatility of the game is extremely high. However, this is offset by the maximum winning of 30,000x the stake, a hit chance of 25%, and an acceptable RTP of 96.01%.

The wilds in this game are the Geisha symbol. When they land partially on the 3rd reel only, they get nudged until they cover the entire reel. Using the nudging wild feature, the Geisha adds +1 to the multiplier bonus each time she moves, up to a maximum of 4x multiplier. You can land wilds on the 2nd to 5th reel, in which case the Geisha can substitute all other symbols except for the scatters. When players land the Geisha on the 3rd, 4th, or 5th reel, they split into 2,3, or 4 symbols respectively, increasing the win ways up to 12,228. All wilds copy downwards during both bonus rounds before splitting.

Scatters in this game are the Oni Masks. Hitting at least 3 scatter symbols awards you with 8 Shogun Spins, during which at least 1 Wild Geisha is guaranteed to land on reels 2,3,4, or 5, an additional +1 free spin will award you with each subsequent scatter symbol. It is possible to upgrade Shogun Spins to Geisha Spins by getting at least 3 scatters and a wild Geisha at the same time. During the Geisha Spins, each Geisha nudges become sticky. At least 1 wild symbol will appear on reels 2,3 or 5, which is added +1 for each bonus symbol.

Players can unlock the Oni Transform feature by landing at least 3 scatters symbols and a stacked warrior. Then, all warrior symbols, along with all scatter symbols, will be transformed into the highest-valued warrior in view.

This is a fun but volatile slot. The wild nudge feature and the Geisha Spins definitely are the core mechanics of this game, which I owe a lot of beautiful hits to. Activating Geisha Spins can in one second bump up your winning to astronomical heights. This is one of those games that don’t pay very often but when they do, it’s quite breathtaking.