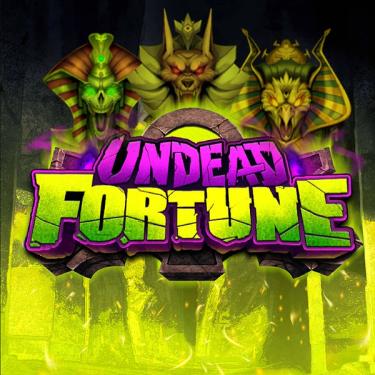 Undead Fortune slot from Hacksaw Gaming takes players to ancient tombs on a quest for amazing wealth. But to find the amazing treasure, they have to face the wrath of scary undead creatures. See if you got what it takes to make it out alive!

Although Undead Fortune packs quite a punch in terms of features, it functions on a quite normal layout of 4 rows and 5 reels with 10 paylines. Big-win chasers will find themselves at home here where the volatility is ⅘ and the max win is capped at 10,000x the bet. The RTP is also up to par at 96.29% default.

The core of Undead Fortune’s gameplay revolves around the DuelReels mechanic where you must defeat a monster on every duel. When you land a Walk VS symbol, it will cover that whole reel with wilds and a monster will appear with a multiplier value. If the monster is not defeated, the spin is over after all the winnings are accounted for. However, if the monster is defeated, players get a respin with the wild reel walking one position to the left. This can keep happening until there’s no more space for the reel to walk.

Similarly, when you land an Expand VS symbol, it comes with a wild reel plus a monster and a multiplier. Defeating the monster makes the reel expand to the left one position; simultaneously, a new multiplier appears and is added to the existing one.

There are 2 types of bonus rounds in this slot, the first of which is The Curse, obtained by collecting 3 Curse scatter symbols. This bonus round is straight to the point: giving you 10 free spins with more chances of getting Walk VS and Expand VS symbols. The second, more advanced bonus is called The Tomb.

Land 3 Tomb scatter symbols to activate the bonus, which is a respins feature that goes on until every reel is locked. Players at the start have 3 unlocked reels and every time they land a VS symbol, they either win and gather the multiplier onto the multiplier above that reel, or they lose which locks that reel up. There are a few special symbols to assist you though:​

Undead Fortune is a gripping experience that showcases the potential of the DuelReels mechanics. The first great thing about the slot is that you can choose the Walking Duel or Expanding Duel Featurespin, which means betting more in exchange for 1 guaranteed VS symbol every spin. It’s 50x per bet for the Expanding Duel so it’s not going to be for everybody, but if you can afford it, the game becomes much more eventful.

The Curse bonus is a bit weak, but the Tomb is absolutely stunning. I like the constant battle of locking and unlocking reels - it makes for such a nice dynamic. That’s not even mentioning that all the monsters are so well-designed that it feels like you’re playing a nice RPG game.