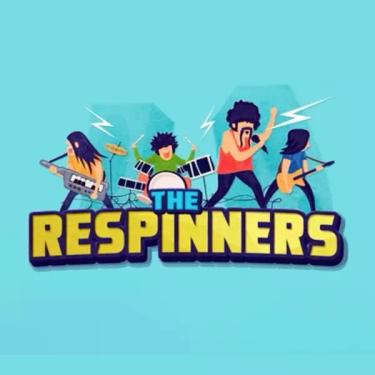 You've heard of the Nirvana and the Radiohead, but now it's time for the Respinners! Developed by Hacksaw Gaming, Respinners is an online video slot that features a mega-famous band illustrated in a retro, low-key and comical art style.

The Respinners band performs on top of a 4x5 grid with 1,024 ways to win. The standard symbols include different musical notes as well as the 4 band members themselves. With vocals being the main attraction of a band, the lead singer in red rewards the highest prize of x4 the stakes for a 5-symbol combination.

In contrast to the trend of extremely volatile slot, Respinners offer a more chill, casual experience with its medium volatility. Even the soundtrack reflects this: it's a lofi beat rather than intense rock. But with an RTP of 96.40% and 5,150x max win, Respinners can still provide some excitement. In addition, the bet size can range from $0.2 to $100.

The wild symbol in Respinners works just like any other game, but there is a special mechanic in the base game called The Crowd Goes Wild feature. This feature occurs randomly, sending 1-12 wilds onto the reels. There is also the Respins feature: when you create a winning combination with a band member symbol, that member is highlighted and awards you a respin.

Respinners takes an interesting twist when it provides no scatter symbol. Instead, players highlight all 4 band members with the Respins feature in one spin to unlock the free spins round. With 12 bonus spins to play, all the band member symbols now carry a multiplier with them. Land a win with those symbols to get the correlated multiplier, and the multiplier now increases by 4x for the next spin. The bonus game is not re-triggerable.

The Respinners is one of those slots that you go to in order to calm down after the more volatile slots have left you devastated. It's a really stable slot that has a simple but fun and interesting core idea. Plus, I've found the returns in the free spins feature have always been damn solid.

Even though this slot maintains well over time, it's almost never the first slot that pops into my mind because there have been very few wow moments I've had with it. It's understandable, you can't have both stability and have super crazy wins. All in all, good solid slot, just not for adrenaline-hungry thrill-seekers.