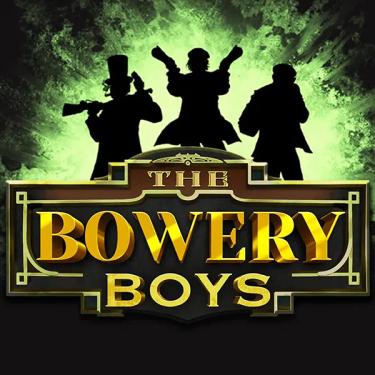 Hacksaw Gaming invites you to experience the rough New York neighborhoods in the 19th century. Tough streets ruled by a great deal of gangs resembling Netflix’s Peaky Blinders. Join The Bowery Boys and bust all kinds of strongboxes and vaults to have a chance to win the max win of 10,000x your stake!

The game is set in a neighborhood popularly nicknamed Hell’s Kitchen in the 19th century, an area once described as “probably the lowest and filthiest in the city” by the New York Times.

Thus, the game is filled with a grim and dark atmosphere, which is something Hacksaw Gaming excels at in all the right ways. It's an experience full of blasting bombs and unrelenting action.

The gameplay takes place on a 6x5 playing field with an all-scatter wins system. In which, all symbols in the game pay like scatters. As long as you land 8 or more matching symbols anywhere in the view, you’ll trigger a winning combination.

The game furthermore utilizes the cascading mechanic. Symbols disappear when they form winning combinations, making room for additional symbols to drop from above, which can then trigger continuously.

The main feature of this Hacksaw Gaming title are its 2 types of multipliers. The first one is the Strongbox feature, which is a multiplier symbol that only activates if you manage to open it with a key symbol. Once opened the Strongbox multiplier will be added to your total win bar which will multiply your total pending win at the end of the round.

The second multiplier feature is the Blasting Bomb Multipliers. These symbols, when landed, multiply your current pending winning combination by your overall total multiplier value. Landing two or more of these symbols will add their values together first before multiplying. The feature detonates only when your total win bar has a pending win active and multiplies it by either 2x, 3x, 4x, 5x, 10x, 15x, 25x, 50x, 75x, or 100x.

The Bowery Boys slot game has three different bonus games, which are triggered by the Bonus symbol. You can land a maximum of three Bonus symbols, each of them unlocking their respective ten free spins bonus games.​

Each bonus game can be extended by landing additional Bonus symbols during your free spins round. For every Bonus symbol that lands, one free spin will be added to your bonus game. The entire base game can moreover be skipped with the Bonus Buy feature. You can purchase any of the three free spins games for 80x, 200x, or 300x your stake, respectively.

Hacksaw is one of my favorite slot providers and I must say they’re off to a great start in 2022! Harvest Wilds was a hit in January, blessing me with massive wins on the first day. Now they’re back with another excellent slot just in the following month. The Bowery Boys is a gritty experience but pays dividends if you stick to it.