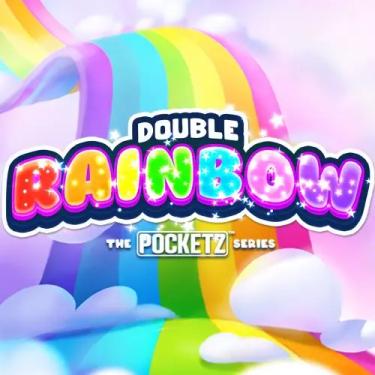 A rainbow by itself is a rare sight, and a double rainbow is even less common since it requires sunlight to be reflected twice within a raindrop. But that’s okay because with the Double Rainbow slot from Hacksaw Gaming, you won’t have to leave it up to the weather to see all these beautiful hues!

Double Rainbow is a clusters-pay slot with a familiar but an unfamiliar gameplay experience at the same time. First off, the layout here is a simple 6 reels and 4 rows with symbols paying when grouped in clusters of 5+. There are 7 symbols in the game representing the colors in a rainbow, all of which pay the same rate: from 0.1x to 50x the bet.

As for technical stats, Double Rainbow has a 96.38% RTP, 39% hit frequency, along with a 5,000x max win. The volatility level is measured at ⅗ so the slot would be a great fit for players that enjoy medium variance. Now, the gameplay of Double Rainbow can be unfamiliar to some because there is not a clear-cut bonus game involved. Instead, the game lets players build up the number of free spins gradually with its unique features.

Because the multipliers are gone once the free spins are over, it’s not easy to obtain the Full Rainbow. But don’t worry, the game has 2 bonus buy options. The first one costs 10x the stakes for every spin but guarantees that all spins will have 4 active multipliers plus 1 free spin. The second option costs 50x, but each spin will give you 4 extra free spins with 4 active multipliers.

It’s hard to give a definitive rating for Double Rainbow because the enjoyment of this slot will definitely vary greatly from person to person. If you like the conventional structure of online slots where there’s an official bonus round, you may not dig this one. The game sometimes gives an illusion that it doesn’t produce big pay-days, but that is just because the big wins here are usually accumulated over a long period of time. It does require more patience than your average slot, so jump in if you like a slow burner.