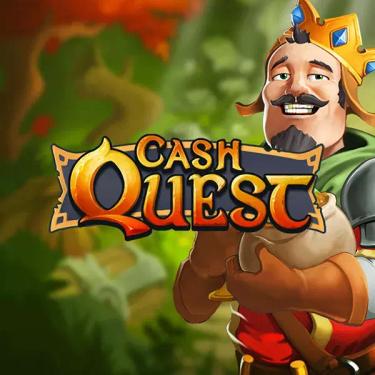 Hacksaw Gaming has buried valuable rewards all around the strange forest and it’s up to you to find them. Cash quest slot looks like some kind of a treasure map through the fantasy land filled with remains of a long battled war, lie swords, shields and locked chests.

The provider has added a new bonus feature into his product line, debuted in this very game. It’s the backbone of the gameplay and quite an interesting edition, so stick around and see what it entails.

At least 5 identical symbols landing in a way that connects them vertically or horizontally creates a winning cluster. Thanks to the cascading reels, symbols participating in the winning cluster are removed with new cards falling in their places, hopefully triggering another cluster.

Clusters with 26+ symbols bring the biggest wins, varying from 15 to 25 times your stake. The highest paying cards include a golden mask, blue dragon and a sword, medium ones are golden token and green bottle, while shield, meat, boot, skull and bones have the lowest value.

Boosterbar is an exciting new feature Hacksaw introduced in this slot for the first time. Basically, it’s a bar located on top of the reels and consists of four extra positions. It triggers when the 'BB' book symbol appears on the reels, revealing special game modifiers: ​

A scroll with FS letters as an emblem represents the Scatter symbols. Hitting three Scatters at the same time awards 10 free spins. Compared to the base game, the bonus round features more Boosterbar modifiers with slightly changed values. Via the Bonus Buy option players can purchase 10 free spins for 119x the total bet.

Everything in the Cash Quest slot revolves around Boosterbar, making the gameplay uneventful. I was craving for the multiplier that never came and spend on it probably more than a won. On the other hand, it showed this slot does have a good winning potential.

But it is still so monotonous. Doesn’t even matter if you have a fullscreen - nothing happens until at least one boost modifier is active.