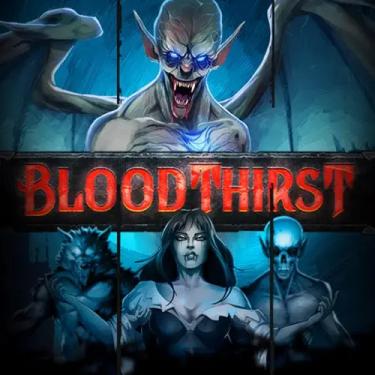 With Bloodthirst slot, Hacksaw Gaming clearly wants to make a lasting mark on the horror-themed section of the online slots scene and the attempt is more than respectable. This is a universe where every monster coexists and from the graphics to the soundtrack, every element in view is aimed to give players the most spine-chilling yet fantastic gaming experience.

At midnight, every kind of monster comes out and can be seen on the 5x4 grid of Bloodthirst slot. If players came eye to eye with werewolf or a demon, it can be a very rewarding experience as they pay 10x the bet for a full line. And although the volatility level here is only ⅘, the game still possesses a respectable max win of 10,000x. In addition, the default RTP is set at 96.19%.

Monster Reels is the main feature of Bloodthirst - when 4 monster symbols of the same kind stack on top of each other, that reel turns into a monster reel that pays as follow:​

What’s more, if a full screen of the same monster symbol happens, the Monster Reel feature gives way to a Monster Takeover feature that pays a much bigger prize: 100x, 250x, 1,000x, or 2,500x for ghouls, vampires, werewolves, and demons respectively.

There are 2 kinds of bonus rounds in Bloodthrist depending on how many FS Scatter symbols land on the reels: 3 FS symbols take you to the Bloodthirst bonus while 4 FS symbols unlock the Immortals bonus. The Bloodthirst bonus is fairly straightforward: 10 free spins with better odds of triggering Monster Reels.

The Immortals bonus, however, is when things get spicy. The same 10 free spins are awarded, but this time one monster symbol will be randomly chosen as the feature’s main symbol. While only this symbol can now create Monster Reels, the reel will be marked if it does get turned into a Monster Reel. Marked reels will turn into Monster Reels each subsequent spin.

Besides, there is an Upgrade Scatter symbol that will upgrade the bonus’ main symbol into the next one on the paytable, which will consequently upgrade already marked reels. If these features sound awesome to play, you’ll be glad to know that you can buy the Bloodthirst bonus for 100x the bet and the Immortals bonus for 200x. Plus, you can choose to bet 3x more to have 5 times the chances to trigger a bonus.

Bloodthirst is an absolute must-try for anyone who is into horror or for anyone who likes dynamic slot gameplay. The game doesn’t discriminate against any sub-genres as we get all kinds of iconic monsters landing on the reels. The Monster Reels is such a simple mechanic but it gets triggered often enough to make for a compelling gameplay.

A full screen of the same symbol rarely happens in other games, but in the Immortals bonus players get a real good chance of it since they just have to mark all 5 reels overtime. What I love most about this bonus is how unpredictable it can be. You can have quite a boring bonus round but in just one spin things can change totally and you can be landing hefty awards.