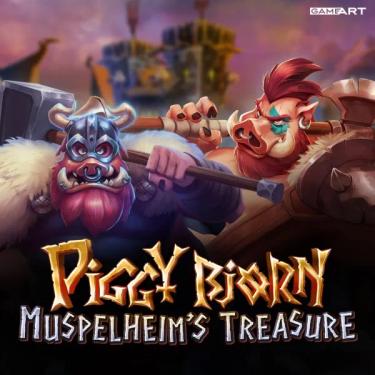 Norse mythology describes the realm Muspelheim is as a hot and glowing land of fire, home to the fire giants. That’s where Piggy Bjorn is headed with his gang of Viking boars in the pursuit of big wins in this slot by GameArt.

The provider's outstanding graphics take the theme to a new level, while the numerous bonus rounds spice up the already thrilling gameplay. Its features and maximum winning potential make this unique slot hard to resist, so let's see all that it has to offer.

This slot starts with 50 paylines and a 5x4 grid with the possibility to expand up to 6x5. It is a highly volatile release with an RTP of 96.12% in the base game or 97.68% when Buy Bonus is purchased. Join the real play by placing a bet anywhere from €0.50 to €50. Viking piggies produce big wins as the maximum winning potential goes all the way up to an astonishing 50,000x the stake.

Complementing the theme completely, runes are representing the lowest symbols, while different weapons are producing the highest and medium wins. Besides regular cards, there's a bunch of special symbols with unique powers spinning on reels - Scatters, Mega Scatters, Wild, Piggy Loot with a random 1x to 20x bet multiplier, and Piggy Collect.

There's a lot going on, but there's no doubt that Raid Bonus is the main feature of this slot. Triggered when 3+ Scatters or Mega Scatters appear simultaneously in the main game, the bonus round awards up to 5 free spins and transforms the activating Scatter into a random Raid Bonus Symbol or Mega Scatters into Fury Taxes Collector symbols.

Raid Bonus Symbols are the only ones that can land during free spins and include Bronze, Silver and Gold Coins, Payday card, Taxes, Payday/Taxes, Reinforce, Hammer, Bow, Odin's Will. Each of these symbols has a special power, as well as its Fury version with the same features (except Reinforce and Payday/Taxes).

Reels expand to the full 6x5 grid when a complete row or line is fulfilled, but that can happen a maximum two times per round. If an entire reel set is filled by Raid Bonus Symbols. the feature ends by awarding the full reel bonus of 500x the stake to the total multiplier.

I find the idea of the Viking boars quite amusing, especially when followed by such outstanding graphics. But the striking visual appeal has never been the problem of GameArt's slots, while the same can't be always said for their winning potential and bonus features.

But Piggy Bjorn: Muspelheim's Treasure slot has it all - bonus rounds and special symbols flying left and right, expanding grid and a lot of multipliers that can boost your wins on every spin. It was very generous to me each time I played it. I said it then, I'm repeating now - this one has insane potential.